Birds have a very important place in the always prolific paintings of Pieter Bruegel the Elder. Some of his paintings -such as The Fall of Icarus and The Hunters in the Snow– reveal not only the unquestioned master of painting but also a prodigious bird watcher. It happens to him as to other bird lovers: he throws himself into contemplation while to the same extent he needs to report the harassment they suffer at the hands of humans. In his painting The Peasant and the Nest Robber, he denounces it explicitly. These circumstances also happen in the work of other artists interested in birds; as if the function of artistic work was to take care of what the human collective tends to destroy. We could even say that such responsibility increases as time goes by, that it grows as human history draw on, just like its capacity to injure the weakest.

We will overcome in part the distance between the time of painter Pieter Bruegel the Elder and ours by turning to a modern writer so prominent in the knowledge of birds as William Henry Hudson; and, shortly after getting into reading his books, we realized that the need to reveal human offenses to birds is so compelling because the author considers it more urgent than ever. In Birds in Town and Village (1919), Hudson refers to the “miracle of the wonderful health of nature”, whose most eloquent manifestation is “the lush and profound joy that birds enjoy in freedom”. That book can be summarized in this way, but in all its pages it is used to warn us that children and adults do not show respect at all for the life of birds. It reports the withdrawal of kingfishers and other animals from the rivers of Great Britain by the effect of those who kill them for the purpose of dissection. The author finds the right words to outline his commiseration by describing the terror of birds when they are chased or shooed away with firearms; when they are harassed in great hunting drives; when the wild goldfinches are subdued to captivity; when there are hunters willing to kill any bird with the only purpose of exercising their aim; when he narrates the suffering of so many birds seeing their nests scornfully destroyed, their eggs broken, their chicks killed or tortured by humans; and when he refers to any of the many criminal acts perpetrated by our fellows against these flying beings.

If, not so long ago, Hudson regretted the unbearable resistance of human beings to honour the lives of larks, thrushes, calandras, starlings and many other birds -on whose singing and customs he wrote inestimable pages- Laura Lio, already in our time, first aims her efforts to rescue the wings of a bird run over on the road, to then pay it tribute by drawing. The artist, although she is not unaware of the Hudson report, prefers to resort directly to the cure; she throw herself into the restoration of all the prerogatives that have to be respected with regards to the birds: the mission of drawing and sculpture consists in emulating the aptitude of the birds for flying and singing, re-encouraging their flight from the artistic work.

“With broken wings / take flight”, say two verses by Laura Lio. It is necessary to close wounds well. Thus, she created the white wing -that is not made up of feathers but with small ex-votos reproducing the shape of human hands- as a wall sculpture, ready for a creative flight. The sum of votive offerings, of objects offered with a wish of healing, acquires the corresponding form of a wing. The fingers of those little hands, stuck together like the feathers of a bird, are arranged as protective goods: they wrap, caress, calm, arm for the flight, guide through the journey.

We infer something like an evolutionary change from bird to angel in the features of that flying arm. While on the wings of the seraphs that flank the image of the Pantocrator from Sant Climent de Taüll we can see some eyes, on this one there are hands. Angels fly by the wings through which they perceive. Moreover, sensitive perception is embodied by diverse organs: hands that see, eyes that listen, static flights. Olivier Messiaen argued that the true school of music was not the Conservatory, but listening to birds; and, since he knew many trills, in his pieces he made angels sing. The effort of Laura Lio can be compared with that of the musician, when the artist pays tribute to the bird’s flight with that omniperceptive wing that encourages us to watch.

The wings are also the motif of several of his drawings on sheet music and stave. The title of the series is Wings on scores. These drawings of wings, fragments of a wing or feathers visually restore the sound of the air. The air beaten by the flying oars of the birds, full with chirpings, trills, songs and shrieks of these animals, flaps the paper. In those visual poems the musical writing, literally or figuratively, merges with the flight and the life of the bird. A restful sound fills presumably the air in the presence of the drawing. The eloquent Finnish architect Juhani Pallasmaa wrote the following regarding those drawings: “Staves become strings plucked by the wings”.

How beautiful it is to understand musical pieces according to the dictates of nature! Among the collages of the series Minimal Things there are musical dictates of nature, as moving as that which arranges a score in concentric hexagons, and thus gathers architect bees and singing birds at once in the human ear. In other collages of that series she uses hair: a lock of hair, for example, that bends over an interweaving of staves. The lock comes from the beak of a bird, to emulate its trills. There is nothing written on the interwoven staves, but the long lock of hair, inhabitant of the air, placed on them, makes them legible. Another of the Minimal Things shows broken staves that are joined in the collage, restored by stitches: in that way the lines are completed, the staves are tied.

The stave shows a line of knots that we can read as a music sheet. And when, as in the first example at Minimal Things alluded to, a written score is folded on itself to form concentric hexagons, we know that the notes also require a nest in which to take refuge and where to grow up. Only a formidable artist, with technical richness and poetic generosity, is able to bring so many agents of visual emotion together in the ear. She deserves a descriptor like the one that ornithologist Hudson dedicated to his admired Spanish poet Juan Meléndez Valdés: “He is the brother of birds, bees and butterflies; he only loves the freedom and the sunlight”. The works of this artist that we get together here deal with the luminous nature, no doubt, that necessarily includes human beings, but not human interests, which often exclude nature.

Some sculptures by Laura Lio compete with, or rather, are in accordance with the architecture of the birds. Specifically, those that take on the shape of nests or colonies of nests, where our imagination seeps into their galleries to pay attention to an equivalent of the “busy hum” alluded to by Jorge Luis Borges in The Aleph, because certainly it exist among birds. The ensemble of three large sculptures, sealed -like honeycombs- by hexagons, also competes with animal architecture, and does so to provide protection and shelter. However, Laura Lio dismisses the shell’s benefit when the model of her sculpture is human architecture, as she do in the house pierced by the tree. In this work, the shelter welcomes nature, settles in, embraces the knots of the roots and lets the branches pass through its walls. This house could be understood as a pendant of other constructions, the white ovoid sculptures, whose embryonic shape, similar to that of a huge seed, is also made to protect, but contains nothing, except air to breathe.

With nothingness, knots and nests, the works of Laura Lio support our growth. A large piece, partly made of wicker, as a kind of fishing creel, takes on the shape of the gynoecium of a lotus flower and the appearance of a fishing gear to throw into the water. Larger volumes appear as lightweights while light works seem rich and compact in their meaning. A trend to growth, to complete development, fecundates the sculptures. A sculpture can even have a single compact element followed by a soft development, such as when threads are used to shape something like a climbing plant, or when the petals of a large flower come out from compact pieces (the pot of the plant, the flower’s chalice?). The sculpture is somewhat self-conscious when it adopts the plants’ shape. The generous plaster leaves, so compact to the touch, so soft to the sight, reward the viewer with the most beautiful consciousness of time. They create an organic clock for our imagination, nourishing it with growth, duration and foreseen loss, just as the wire leaf announces, by encouraging us to accept the whole cycle of life.

The drawings of leaves on large papers are more offerings than drawings. One is fleshy, another fragile. One vibrates, another trembles, both are revealing. The paper sheet struggles in both to take the vegetable leaf in completely, and get it. The offering would possibly be even better rewarded if accompanied by the singing of a blackbird. 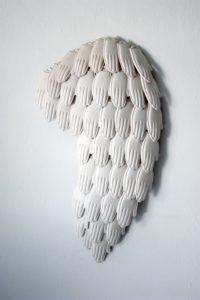 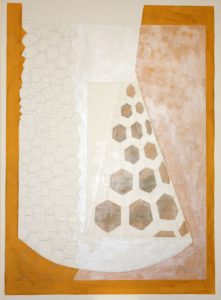 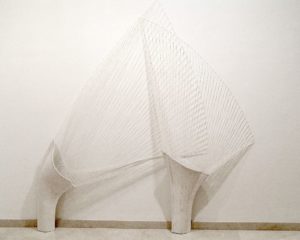 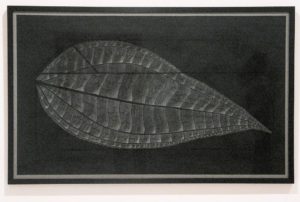 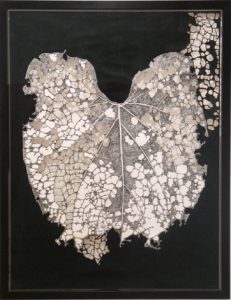 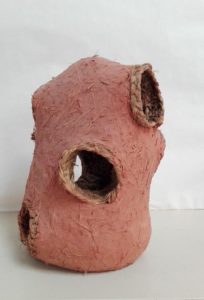 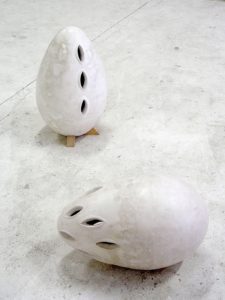 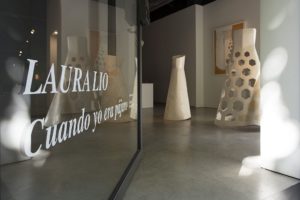 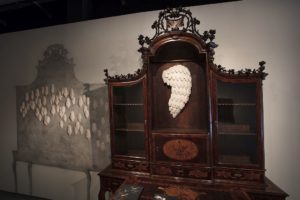 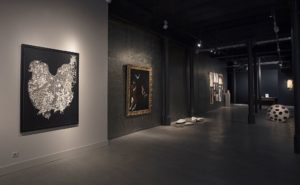 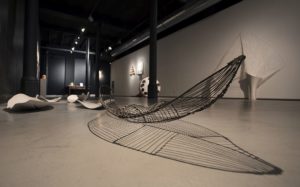 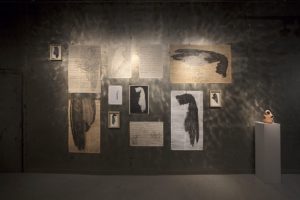 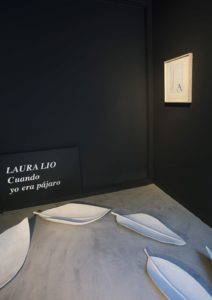 Bailén 19. 08010 Barcelona. Ver mapa Tel. +34 93 302 59 70 art@arturamon.com Mon-Fri: 10am to 2am and 4:30pm to 8pmDesign&web by: Brinkels
This website uses its own cookies and third-party analysis cookies to collect information in order to improve our services, as well as for the analysis of your browsing. If you continue browsing, it implies acceptance of their installation. The user has the possibility of configuring his browser and, if he so wishes, can prevent them from being installed on his hard disk, although he must take into account that this action may cause difficulties in browsing the websiteAcceptHow to configure