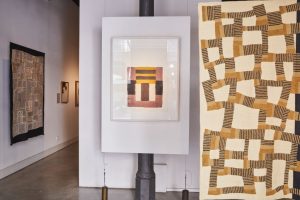 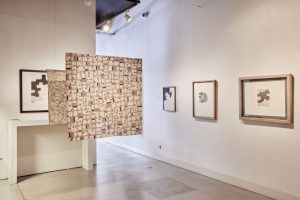 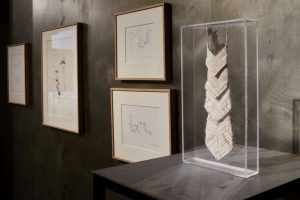 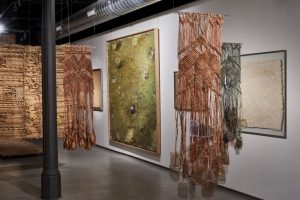 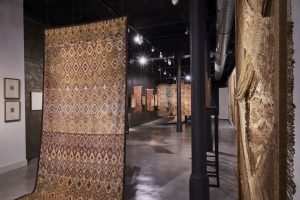 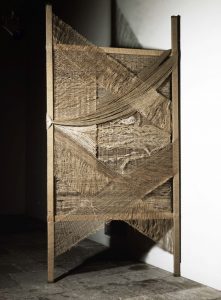 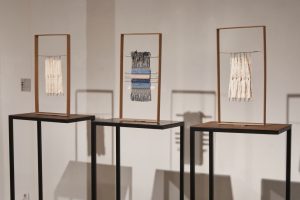 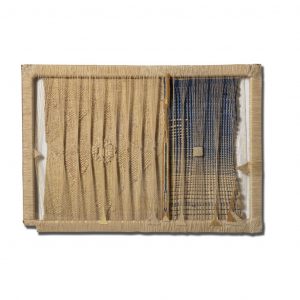 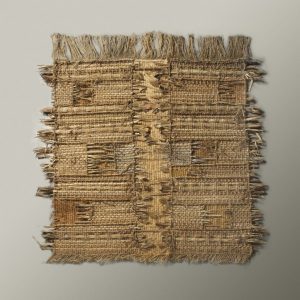 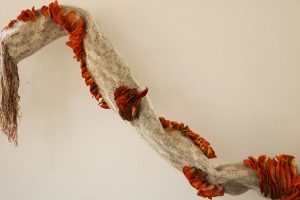 Carla Mañosas (b. 1992, Sant Cugat del Vallès) is graduated in Art and Design at the Escola Massana in Barcelona, awarded with the mention of Applied Arts. She has specialized in the Art of weaving with different practices in Paris and Denmark. Nature is the source that inspires her work, which consists of the observation and interpretation of existing forms. The fabric is the material that acts as a link between the artist and the intervened space, creating a game of links and values, a relationship of union and respect with other existing biological rhythms different from ours. Although at the beginning of her career, she has already exhibited in several cities in Spain and Portugal.

Aurèlia Muñoz (Barcelona, 1926 – 2011) studied at the Montserrat Institute, at the School of Applied Arts and at Escola Massana in Barcelona. She approaches the art of weaving in the 1960s when she began to paint burlap. In the ’70s she committed to the task of vindicating crafts and weaving as forms of cultural and artistic expression. The research process has always been an obsessive part at the basis of her work, characterized by the reinterpretation of artisan techniques, elevating macramé, patchwork, tapestries and even Japanese origami to avant-garde and abstract art form. She is a consecrated artist whose work is part of the best museum’s collections in the world (Kyoto Museum of Modern Art, The Art Institute of Chicago, The Cleveland Museum of Art, the Reina Sofía National Art Center in Madrid and the King of Dubai Collection among others).

Francesca Piñol graduated in Anthropology and attended master’s degrees in Textile Design (UPC) and African Studies (URV). Since 1999 she has been a professor of Textile at the Center for Art and Design of the Escola Massana in Barcelona. She associates art with neuroscience and in 2018 she obtained the honourable mention in the international Art of Neuroscience competition. Her work is marked by the combination of colours, textures, shapes, symbols and she is fascinated by the interweaving of diversities. She technically works with damask and Jacquard looms; this allows drawing lines and shapes on the fabric, using the different textures that arise from the contrast between the fibre and coloured threads. In addition to Spain, she has exhibited in France, Italy, Egypt, Portugal, Denmark, etc.

Pilar Sala (Lorca, 1942) studied pharmacy and through the seminars of the critic Kevin Power and Professor F. Jarauta she discovered the world of art. Her work consists of the production of contemporary tapestries, high heddle weave and manual papermaking, made from cellulose fibres from plants. With her very personal vision, she transforms her textures into installations, sculptures, collage, artist’s books and visual poems. She uses her art to sensitize society, especially regarding environmental issues and the search for freedom. In 1980 she obtained the honourable mention in the “I National Tapestry Prize” in Aranjuez and she was the Spanish representative in the VI International Tapestry Symposium in Graz (Austria). She has exhibited in Belgium, Germany, Taiwan, Russia, Denmark, among others.

Amparo de la Sota (Madrid, b. 1963) is the daughter of artists, therefore began her artistic training soon. She constructs her works with irregular pieces of old cloth, sometimes broken and worn out, recovered from the past and transformed into new realities. She uses threads and warps to develop complex abstract compositions, confused but balanced labyrinths that give rise to geometrized rhythms and sequences, harmonized by a serene chromaticism. She exhibits in Spain, Portugal, Ukraine, Mexico, Uruguay.

Marga Ximenez (Barcelona, 1950) is a visual artist, sculptor, cultural manager, illustrator of different books and teacher of textile techniques at the Faculty of Fine Arts in Barcelona. Her work, eminently sculptural, proposes a reflection on identity, introducing the concept of heteronomy and the multiplicity of identities. An active feminist, her work also presents a profound reflection on the female condition facing life and death. He has exhibited in Spain, Switzerland, Poland and Denmark, among others, she has been awarded the National Print Design Prize and has participated in the Biennials of Lausanne, Poland and Vicenza.

Bailén 19. 08010 Barcelona. Ver mapa Tel. +34 93 302 59 70 art@arturamon.com Mon-Fri: 10am to 2am and 4:30pm to 8pmDesign&web by: Brinkels
This website uses its own cookies and third-party analysis cookies to collect information in order to improve our services, as well as for the analysis of your browsing. If you continue browsing, it implies acceptance of their installation. The user has the possibility of configuring his browser and, if he so wishes, can prevent them from being installed on his hard disk, although he must take into account that this action may cause difficulties in browsing the websiteAcceptHow to configure