Coinciding with the publication of Esther García-Portugués’ catalogue raisonné on the work of Mariano Andreu, we exhibit some of the artist’s works in the upper exhibition space of Artur Ramon Art.

Mariano Andreu Estany was born in 1888 in Mataró and died in 1976 in Biarritz, in France. He was a multifaceted artist, who explored multiple techniques and artistic disciplines: enamel, drawing, sculpture, painting, printmaking, fashion, book illustration, origami, stage and costume design for theatrical works, ballet and cinema. From 1920, and after some trips to Italy and temporary stays in Paris, he settled in the French capital and exhibited in various galleries, which allowed him to achieve certain international recognition.

This exhibition features approximately twenty works, especially drawings, prints and some paintings, which encompass various facets of the work of the artist, from his taste for the feminine nude to his interest in world of show business, as well as still lifes and cubist deformations of his representative works.

The drawings and engravings on exhibit here deal with the artist’s three favourite themes: the female figure, horses and characters from popular entertainment or “farándula” (acrobats, tightrope walkers, animal tamers, Punchinello, and harlequins). His representations of women range from delicate and languid feminine figures, to more powerful, mannerist, muscled representations, with volumes verging on the sculptural.

During his childhood, Andreu lived daily with people from the entertainment world, which is evident in his work.  When he was two or three years old, his parents moved to live close to the Circo Barcelonés (Barcelona Circus), which he could observe from his home. He was not only interested in the world of the circus, but also in that of the theatre. His activity as scenographer and costume designer for theatrical works is well represented in the selection of exhibited works, especially in his work for Shakespeare’s Much Ado About Nothing in the Memorial Shakespeare Theatre of Stratford-upon-Avon (1949, 1950 and 1955). 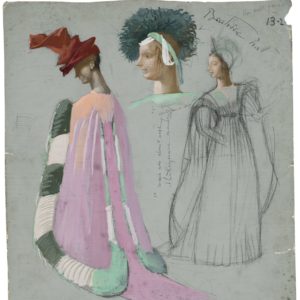