“On the Terrace of the Villa Mondragone,” an 18th-century drawing by Claude-Joseph Vernet. Credit via Artur Ramon

PARIS — There is an ocean of lower-priced art and collectibles that are not often featured in live auctions at Sotheby’s and Christie’s, or in media coverage of a market whose newsworthiness generally depends on dizzying salesroom highs.

It is an ocean into which the vast majority of individuals who would like to buy art can afford to dip their toes. So where can value be found?

“Drawings are a very good way to enter the market,” said David Breuer-Weil, a London-based artist who was among many collectors in Paris recently for the 27th annual Salon du Dessin and its accompanying auctions.

“It’s not a compromise: A drawing is the essence of artistic creation,” Mr. Breuer-Weil added. “You can get close to an artist you admire in a way that’s affordable.”

An internationally exhibited artist who buys drawings by modernist masters such as Cézanne, Matisse and Picasso, Mr. Breuer-Weil is hardly an entry-level collector. But the week of the Salon du Dessin is the one time of year anyone interested in buying a drawing is seriously spoiled for choice.

On March 21, for example, the French auction house Artcurial held a 195-lot sale of old master and 19th-century art. About a quarter of the works were drawings estimated at less than 5,000 euros, or about $6,200.

Among these was a red and white chalk study from about 1600 by the Dutch Mannerist artist Abraham Bloemaert of a flying putto firing a bow. The double-sided drawing — a study of a basket of flowers is on the reverse — was bought for €3,900, with fees, by Daniel Vanel, a doctor and collector based in Bologna, Italy, who owns about 100 old master drawings.

“No one wants the average things,” Mr. Vanel said as he watched the auction. “And the best things are getting more and more expensive.”

As if to prove the point, three lots after the Bloemaert, a pen-and-brown-ink drawing of the crucifixion by the 17th-century Dutch artist Samuel van Hoogstraten was bought in the salesroom by the international dealer Bob Haboldt for €319,000. The drawing, traditionally attributed to Rembrandt (in whose studio van Hoogstraten trained), had been estimated at €40,000 to €60,000.

This was the quality of drawing that exhibitors hung in their booths at the Salon du Dessin, which Mr. Vanel described as a “museum where you can buy, if you’re rich.”

The long-established centerpiece of the French capital’s “Drawing Week,” the Salon du Dessin is held in the grandiose Palais Brongniart, a former stock exchange. This year, the fair featured 39 dealers and attracted 14,500 visitors over six days, an attendance that was 11.5 percent up on the previous year, according to the organizers.

“This is the best fair in the world for drawings,” said Artur Ramon Navarro, director of Artur Ramon Art, a dealership in Barcelona, Spain, who was exhibiting at his ninth salon. “But the market is very selective. Collectors are looking for top-quality drawings that have solid attributions, are in good condition and are fresh to the market.”

Mr. Ramon Navarro ticked those boxes with the rediscovered Claude-Joseph Vernet pen-and-ink drawing “On the Terrace of the Villa Mondragone,” which was sold for €150,000 to a French collector at the opening of the fair. Mr. Ramon Navarro had acquired the atmospheric 18th-century drawing, showing an Italian country house, from a private collection; scholars have accepted it as a previously unrecorded work by Vernet, who lived in Rome.

Another discovery at the salon was the haunting red chalk head of John the Baptist, which the Paris dealer Galerie de Bayser had identified as a study for the circa 1520 painting “Salome” by Cesare da Sesto, a follower of Leonardo da Vinci. An American collector bought it at the start of the fair for a price between €400,000 and €500,000, according to the gallery’s director, Louis de Bayser.

But were there enough specialist buyers during the week of the fair to support the sheer quantity of material? At the same time as the Salon du Dessin, contemporary artists were showcased by 72 dealers at the 12th edition of the Drawing Now Art Fair. There were also auctions at Sotheby’s and Christie’s and at the Hôtel Drouot salesroom complex, as well as various dealer shows.

At the auctions, thanks to competition between specialist dealers and collectors, the more important works fetched reassuringly high prices, and overall selling rates were healthy enough. On March 22, Sotheby’s held its second annual works on paper auction during the salon, netting €5.8 million from 141 lots, with 74 percent of the lots successful. Works by modern masters predictably dominated, with a top price of €669,000 given for a large 1950s Chagall watercolor of newlyweds and a bouquet of flowers in a moonlit window. Smaller drawings by major names such as Paul Delvaux and Paul Signac were selling for less than €10,000.

“A lot of the market is driven by financial concerns. People want big iconic works,” said Mr. Breuer-Weil, the British artist and collector. “If you buy a drawing, you can get a work by the artist for a 200th of the price of a painting.”

Across town at the Drawing Now fair, there was also value to be had from contemporary artists who focused solely on draftsmanship. 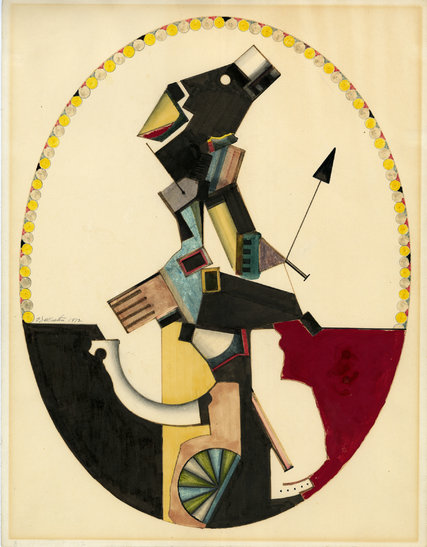 A drawing made in 1972 by the African-American artist Eugene J. Martin. CreditMaus Contemporary

The Birmingham, Ala., dealer Maus Contemporary represents the estate of the African-American artist Eugene J. Martin, whose works have been acquired by a number of regional museums in the United States. In the 1960s and ’70s, Martin, who was influenced by European modernism, was too poor to buy painting materials, so he instead made small-scale abstracts on paper. A striking Constructivist figure made in 1972 during the protests over the Vietnam War was bought by a French collector for €4,000.

“The French have a romantic attachment with the nobility of paper,” Guido H. Maus, the gallery’s director, said, referring to France’s long tradition of collecting drawings and prints, reflected in the number of specialist galleries that are a distinctive feature of Paris.

A drawing by Bloemaert or Martin might not impress a hedge fund manager who comes around for dinner. But as the prices for paintings by blue-chip names soar far beyond the reach of the average collector, “Drawing Week” is a welcome reminder that there are approachable ways to live with original art.